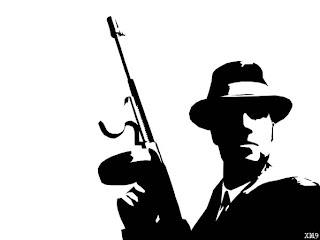 The aim of Mafia is for the students to root out who is Mafia before the Mafia kill all the Citizens.
I first came across Mafia this year while teaching in Spain. It quickly became popular with students and like some of the other games that can be found in the teens section it acted as a great incentive and reward for students.
Mafia can be daunting the first time you play it but after the students get the hang of it, they will soon be requesting it again and again.
I have used this activity in summer camps with as many as 24 students with great success but I would recommend it with smaller groups of 10 – 12.

Method: 1. Print out the character cards on card and laminate if you can as this game can be reused. 2. Tell the students that they are each going to receive a card. They must not tell anyone what is on their card. Tell them that they must find who are mafia before the mafia kill all the citizens. The doctor can save one person per round and the police officer can investigate one person per round.

3. Give each student a card.

5.  Ask the Mafia to wake up and choose who they are going to kill. When they have selected a person by nodding or pointing tell them to “go back asleep”

6. Next invite the Doctor to “save someone”. Again like the Mafia this will be done in silence. When they have chosen tell them to go back to sleep.

7. Then ask the police officer to “wake up” and choose who they would like to investigate. They chose in silence and you nod and agree whether they are or are not Mafia.

9. Invite students to guess who they think is Mafia. The first round is usually quiet because anyone can be Mafia, however by the second round students quickly become more vocal and accusations fly around the room. Remember Mafia must defend themselves and avoid being detected. People who are killed in the rounds cannot participate in the accusations or give any information that may let the other know

10. Continue until either the Mafia or Citizens win.

After you have played this game the first time, the students become more active and interested in the game. It may sound complicated at first but it gets easier after your first attempt. As you are the teacher you can add any of your own elements as you like. Please leave any suggestions or comments below. Enjoy!

Printable:  View Download
Game originally seen here but without the character cards which I made to give a finished touch to the game.

ESL Kids Games by David Mulcahy is licensed under a Creative Commons Attribution-NonCommercial-NoDerivs 3.0 Unported License. Based on a work at www.elskidsgames.com.